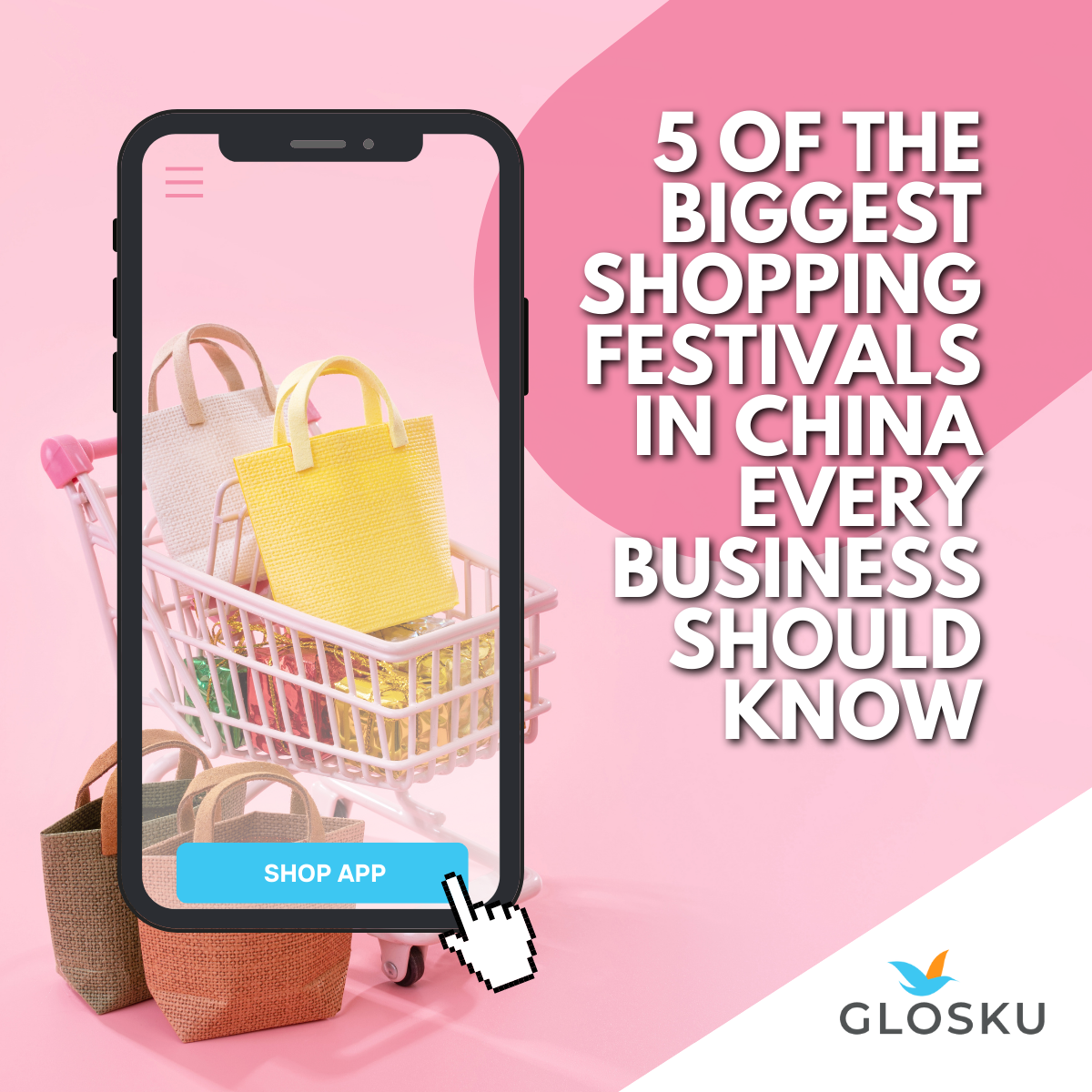 With almost one billion people using their smartphones to search, shop, and purchase items, there is no denying that China is the biggest and also fastest-growing e-commerce market in the world. And one reason for their countless shopping festivals that happens almost every month. These festivals are an important events not just for shoppers but also for businesses looking to boost their sales in an instant.

Below are some of the biggest shopping festivals in China, and if you’re looking to have your sales go up, then you should read the following below:

This shopping festival also known as the “Lunar New Year” or “Spring Festival” is the most important festival in the country. This is when people gather and celebrate the day with their family and friends. During this festival, demand for food, drinks, snacks, and things used for gifts are very high. Making it a huge opportunity for a lot of businesses both locally and internationally to generate huge sales.

Well, believe it or not, this festival is the third Valentine’s Day for Chinese people. The reason why it is considered another Valentine’s Day is that 520 and “I love you” sound similar in Chinese. For most young men and women, this festival has become a trend wherein they give each other gifts and eat at restaurants, which serves as an opportunity for businesses to make discounts, and promos to attract more customers.

JD.com, the second largest e-commerce company in China, started celebrating its anniversary on the 18th of June every year since 2010. And ever since, the company has been offering countless discounts, promotions, and sales that last for up to 18 days. This move has attracted a lot of customers and made other e-commerce companies do the same every June.

Who would have thought that this shopping festival would be the biggest in the world?
It was first introduced by Alibaba in 2009 and has also been adopted by other companies. And since it was the biggest shopping event not just in China but in the world, companies have been coming up with various ways to promote their products to attract more customers and drive more sales.

Three Tips Retailers Can Use To Reach Southeast Asian Consumers

With a whopping population of 600 million people, Southeast Asia has been a hotbed for the e-commerce industry. This Asian region consists of young consumers with demands that local retailers cannot satisfy, which tempts foreign e-commerce companies to take risks and enter its market. But what are some tips foreign retailers can use to introduce their brand in this fast-growing Asian market?

When entering a certain market, it is a requirement to know who your audience is, and by entering this region, you should already know that a large number of its population are young, demanding, and spend most of their time using their mobile phones.

This is what makes having a website that would provide an easy and seamless mobile shopping experience important. And as we all know, customer satisfaction is what keeps a business alive and growing.

In doing business with online shoppers in Southeast Asia, foreign brands should also find a solution to shorten the time of delivering and transporting goods from their hub to their customers’ doors. The region is known for having heavy traffic, poor motorways, and poorly planned urban development projects which all contribute to a longer duration of delivering customer orders.

It has been proven that factors such as cost, quality, and delivery time helps a business stand out from its competitors. This is why excellent planning when it comes to logistics should be made to ensure consumers that they will get what they paid for as soon as possible.

An easy payment process plays a crucial role in the overall customer experience. This means that in completing a purchase, your business must offer a variety of payment options for your consumers to choose from, especially Southeast Asian consumers. This is because these consumers have different ways to pay for something and it primarily depends on what is the most convenient for them. Some use cash thru cash-on-delivery options, some pay using credit and as the region has already embraced FinTech (Financial Technology), a lot of consumers tend to pay using their e-wallets.

To successfully enter the Southeast Asian market, one must know what works for a business and what doesn’t. These tips are just “tips” that can make it easier for you to achieve your goals, and don’t guarantee to meet expectations. But these tips together with a lot of patience, dedication, and hard work, can make the chances greater to find the path to success.

If you are a business trying to look for places where you can have your business achieve growth and generate lots and lots of profit, then you might want to consider entering the Southeast Asian market. It became an attractive market to be in after it has witnessed economic growth for the past years and still has a lot of untapped market opportunities waiting to be grabbed. But what are some countries that do well when it comes to business?

Here are the top five countries you may want to do business with.

Who would wanna miss the opportunities behind the “Lion City”? The abundance of skilled workforce and resources, a robust economy, and an attractive tax system, plus a simple and straightforward procedure when starting a business that is fast and easy make it a pot of gold for people looking to start a business within the country. This makes it easy to be a “Zai” in the industry you’ve chosen in no time.

Another opportunity-packed country at the heart of Asia, Hong Kong can also be a great country to start your entrepreneurial endeavors. As the country offers a plethora of advantages such as an easy incorporation process, a business-friendly environment, and a place where people can speak and understand the English language. This makes it easier to communicate with your target audience and deliver the message your brand is trying to convey.

With a pro-business government and a market-oriented economy, there’s no doubt that Malaysia is a good country to do business with. The country also provides a robust and conducive business environment that promotes and encourages growth, profitability, and healthy competition within businesses of all industries. This makes doing business in Malaysia a profitable country to do business with, as it can get you profits as high as the Petronas Tower.

It is indeed easy to do business in Taiwan, in fact, it ranked 15th out of hundred and ninety economies in the World Bank’s Ease of Doing Business Survey in 2020. It can also serve as a strategic location whenever you have more plans on expanding as it is near some of the world’s biggest economies such as China. And unlike other countries, Taiwan allows foreigners to have full ownership of their companies, without any minimum paid-up capital requirements.

Although language barriers can be a problem when doing business in Thailand, the country still offers one of the most promising workforces in the world. This just means that any foreign business can benefit from a large pool of skilled workers to work for their companies. With steady growth, strong exports, and a vibrant economy, there’s no doubt that Thailand can lead your business to success.

Taobao
Year Founded: 2003
Estimated Monthly Traffic: 300 million
Taobao has been the biggest e-commerce site in China since then. This status has been achieved all thanks to the great competition given by eBay an American multinational e-commerce company that is also now continuing its colossal operations across the world. Taobao was also responsible for the existence of Alipay — one of China’s major payment systems.

Pinduoduo
Year Founded: 2015
Estimated Monthly Traffic: 280 million
Despite not being exposed for too long in the e-commerce scene, Pinduoduo has made its way to becoming one of China’s biggest e-commerce companies of all time. Pinduoduo has also been a great playground for innovations in the e-commerce industry such as team purchases, social commerce programs, and the C2M business model.

JD
Year Founded: 1998
Estimated Monthly Traffic: 170 million
Another challenge when it comes to the e-commerce industry. This e-commerce giant has been in the scene for almost 30 years. JD has been on the lookout for the latest advancement in technology such as AI-driven vehicles and drones. And although these are still in development, JD has already owned the biggest drone delivery infrastructure in the world.

Tmall
Year Founded: 2011
Estimated Monthly Traffic: 100 million
Probably the youngest on the list, Tmall may have been the latest to start but it was never a hindrance for this e-commerce giant to become China’s most popular e-commerce site, while it ranks third in the world. It also became the biggest Chinese cross-border marketplace not long after it released its branch called Tmall Global.

Xiaohongshu
Year Founded: 2013
Estimated Monthly Traffic: 50 Million
Founded 9 years ago, this e-commerce giant started as a community of people who discuss their thoughts and reviews about certain restaurants, places, and products bought online. This is where it became a very useful website for people that are still torn between buying a product or not.

These companies truly have made our shopping experience easier, and for sellers, having e-commerce sites this big will give them time, effort, and energy looking for people who can buy their products. Instead, people will be the ones who will come for your product and have their first purchases with your business completed.

With almost one billion people using their smartphones to search, shop, and purchase items, there is no denying that China is the biggest and also fastest-growing e-commerce market in the world. And one reason for their countless shopping festivals that happens almost every month. These festivals are an important events not just for shoppers but also for businesses looking to boost their sales in an instant.